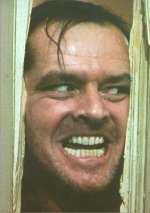 Frank, trying to set the IRQ on a plug'n'play Ethernet card while configuring a SCSI controller for a 6 GIG Seagate Tape Drive.

Buy your computer from a hacker.  You won't be sorry.

Even Northgate, by the way, puts the "\" in an idiotic place.  Anyone who still uses the dos prompt has to reach his pinky way over to the right, to below the <enter> key to get to it.   Meanwhile, the "}" is right up there in easy reach.  Yeah, and how often do you use the "}"?

I used to buy computers from salesmen.  I shopped at MicroAge, way back in the 1980's.  A salesman convinced me that the IBM PS/2 Model 80, at $13,000, was better than state of the art. It was cutting edge.   And, best of all, it used the new MicroChannel Architecture, so our I/O devices would be fast and easily configured.  He rhapsodized about how IBM's reliability and stability were in a class unto themselves.  That's why, when he offered a service contract at about $3,000 a year, I told him no.  I said, "if it's so reliable, we won't need one."

Well, as we all know now, MicroChannel died a quick, obscure death.  When did I first realize I had been duped?  When I tried to get a tape back-up drive for it and found out it cost $700 for the interface card alone.   Even better, I wanted an IBM keyboard for one of our other computers: $675.

It slowly dawned on me that this salesman, Wally, didn't know a thing about computers, didn't love computes, didn't even know how to work a computer.  I began to realize this when he wrote out my invoice, by hand, on one of those old metal boxes with the triplicate forms in them.

The next time I went shopping for computers, I went to a little shop in a decrepit little storefront on Queen Street.   "Frank" sold me IBM clones for about $3,000 a piece.  They were faster, better, more reliable, and more compatible (obviously) than anything MicroAge was offering at the time. I bought a Northgate keyboard from a company in Minnesota for about $150 after hearing Jerry Pournelle in Byte Magazine rave about it. It was better than the IBM keyboard-- had the same nice click that I like, but it was lighter and more responsive.  I had it for seven years before dropping a big heavy computer manual on it.  I am not kidding.   It was the manual for Word Perfect 5.0.  It cracked the circuit board inside.  I tried to re-solder it, but it was beyond me.  I ordered a new one from Northgate.  (Northgate's keyboard division has since been bought out by their employees.)

Frank was a hacker.  He dressed like a hacker.   He looked like a hacker.  I think he smelled like a hacker too, though I never got close enough to find out.  His shop was a mess.  He had a troll in the back room assembling motherboards and CPU's and installing cards.  But I loved Frank.   He sold me computers and computer parts at a fair price.  He loved computers.   When a new device came out that was cheaper and better, he always recommended it, even if his profit margin was smaller.  He couldn't stand to sell you a piece of outdated, stupid technology, like parallel port tape drives or thermal printers.

Wally always wore a suit and tie.  He looked frazzled for a while-- I heard he went through an unpleasant divorce.  He probably sold his wife one of those pathetic P/S 2 Model 50's which were still based on the 286 processor and came out at the time the 386 was already getting old.  It had a slick case, but the pathetic little power supply was capable of about 2 watts and it was impossible to upgrade.

The MicroAge store was slick and expensively decorated and went through a redesign every few months. I'll bet their staff went on "retreats" and developed "strategic plans" and "mission statements".  They're mission statement back then was something like: "We will fleece the customer for as much money as we can by deceiving him into believing he will be more productive with an empty hypocritical slogan than he will be with a functional computer".

Frank's mission statement was, "Where the hell did I leave that IDE cable?  It was here a minute ago."  His strategic plan was to find his desk.  His code of customer service was to try to remember to send out an invoice, and he gave you credit only if he remembered your name.

The world could do with a lot more Franks.  We already know where all the Wallys are.