I just happened to be wandering around Kursk one day with 1 million men and a few tanks and...

Hess: left Germany in May 1941, years before most of the worst Nazi atrocities were committed.

Von Manstein: fought to the end of the Reich.

Hess: betrayed Hitler  who ordered that his plane be shot down.

Von Manstein: loyal to the fuehrer to the end.

Hess:  wanted to negotiate a peace deal with Britain, possibly with the aim of turning the Reich's full force upon the Soviet Union.

Von Manstein: I was just following orders, except when I didn't. Critical of the officers who attempted to assassinate Hitler.

Von Manstein: released after serving 4 years of an 18-year sentence. 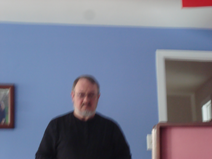 But even the generals did not anticipate the T-34 tank, in the huge numbers the Soviets were able to muster, or the millions of soldiers they could eventually hurl into the war.

At the end of World War II, German Field Marshal Erich Von Manstein surrendered to the British and was incarcerated at a camp in Bridgend (somewhere in England) for about 8 years.  His health, apparently, was a concern, so he was released early from an 18-year sentence (after a mere 4 years).  Then he lived for another 20 years, during which he apparently enjoyed the confidence of the new, democratic West German government.

Von Manstein had lots of friends, including Churchill and General  Montgomery.  They testified to his good character.  Von Manstein, you see, was one of those "honorable" Prussian generals who only wanted to serve his country with courage, dignity, and good grooming.

How he suddenly found himself in Stalingrad with a  million Germans with guns and tanks remains a mystery to this day. 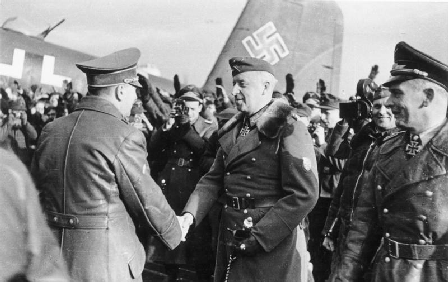 Von Manstein wrote in his biography that if Hitler had only left the generals alone to manage the war in the East, Germany would have won the war.  What a shame.  Isn't that what comes to mind-- what a shame?

Aside from the fact that it probably wasn't true-- Russia was not France--  you would think Manstein would have been glad-- given his avowed personal reservations about Nazism--- that someone prevented Hitler from taking over the world.  Especially since it couldn't be him, what with duty and honor and all that.

Like Rommel, Von Manstein claimed he never carried out many of Hitler's criminal directives and that appears to be partly true.  Other than the one to kill 5 million Russians and bomb Stalingrad to the ground, of course.

So conservatives love to point to a guy like Von Manstein because, from a certain, twisted perspective, he seems to represent the idea that war-making can be ethical, uplifting, spiffy, and delightful.  What fun it would have been if that parvenu Hitler hadn't spoiled the party!

Unfortunately, one has to accept the fact that, like Rommel, and Beck, Von Manstein didn't really seem to have that big of a problem with Hitler as long as he was winning.   The ethical issues only seemed to come up when the possibility of war crimes trials appeared on the horizon.

That's the problem with the entire "conservative resistance" to Hitler-- they almost all supported him regardless of his policies as long as he was winning.  The problem with the Jews?  Well, you had to obey orders or you would be shot.  Except that the Italians weren't very good at obeying those orders and they didn't get shot.

When Hitler started to lose, then they suddenly seemed to realize that the concentration camps were a bad idea.  "I knew it!  I knew we would get in trouble for that..."