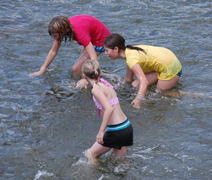 Upstairs, I hear K. D. Lang's collection of Canadian classics playing.  So far, without exception, they are terrible.

K. D. Lang has a voice, a technical instrument of great virtuosity.  If that's what you listen for in a piece of music, by all means, she's your man.  But "Helpless", for example, is about a feeling of desolation, of disconnect, and vulnerability.  You can't make a song sound like that by showing off your pipes, but Lang can't resist doing it because that's what she does.

Meg Whitman in California has spent close to $130 million of her own money on her campaign so far (for governor).  Jerry Brown, her democrat opponent, has spent about $4 million.  They are tied in the polls.

"Who could object to being tricked in this way? The audience, knowing more than Sugar does, is rendered dizzy by the vertiginous spectacle of one movie star so shamelessly “doing” another. "  New York Times article on Tony Curtis as Josephine being "seduced" by Marilyn Monroe in "Some Like it Hot", directed by Billy Wilder.

In the scene referred to above, Tony Curtis, who recently died, is pretending to be a wealthy playboy named Shell Oil Jr.   He has convinced Marilyn Monroe that he is impotent.  Good sport that she is, Monroe is determined to end his agony and "cure" him.  But the "doing another" reference above is not actually a comment on the seduction-- it's a comment on Curtis deliberately playing Shell Oil Jr. as Cary Grant.

I don't think it's a mean-spirited parody.  It just, probably, seemed like a fun thing to do, and Billy Wilder, a very good director, obviously decided to go along with it.

I'm more interested in the word "vertiginous", which means, according to Wiki, "characterized or suffering from dizziness or vertigo".  So I guess the writer, above, means that Curtis' performance is so exciting that the viewer may be left dizzy, which, in fact, he suggests in an earlier phrase:  "rendered dizzy", making the entire sentence sound like "the audience was rendered dizzy by the dizzying spectacle of Tony Curtis" blah blah blah.

I like the word and I will try to remember it the next time I need to describe someone or something that causes me to feel dizzy.  There was a staff member last week--- shall I?   "Last week I had the vertiginous experience of attempting to correlate B's specifications for a web site into actual html and css code."

I just ran into another word: anodyne, in reference to the names of various associations in the U.S. which are fronts for conservative donors and which run ads in various districts attacking the Democrats.    Anodyne means "not likely to cause dissent or offense".  Such as "American Growth Fund" or "Keep America Strong Foundation".

Most of politics, in the U.S., and elsewhere, consists of providing anodyne expression of vertiginous debacle.