Somewhere around 1966, my brother Harry gave me a tape recorder exactly like this one. 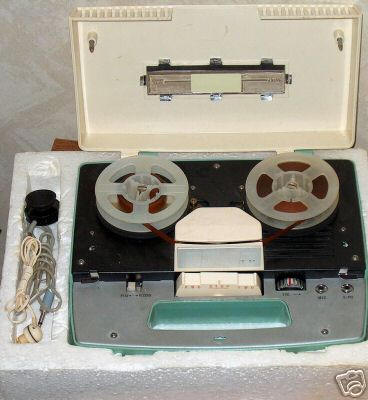 I loved this tape recorder, the Aiwa TP-40.  (Amazingly, someone posted a video of the unit in its original packaging!)  It was my first real electronic device. It had a microphone and an ear plug and a built-in speaker. I actually used it to record music from the radio. If you didn’t have the record back then, that was the only way you could hear a song over again when you wanted to, short of buying the record.

So this was the tool of my first act of musical piracy.

I’ve always liked the looks of the reels turning around. I’ve even toyed with the idea of picking up a used Nagra recorder for the pure visceral thrill of seeing a finely crafted machine actually do something, visibly. The television show “Mission Impossible” used to use a Nagra for the famous “your mission, should you decide to accept it…” sequences at the beginning of each show. It was cool.

The Nagras, however, are such marvels of engineering that even though they are completely obsolete they still command very high prices on eBay. I saw one for over $1000. That makes no sense– you can buy a very, very good digital recorder for $150.

I have a little minidisc recorder which, compared to my little Aiwa, is a Boeing 747 compared to a Spitfire.

I saw Bob Dylan and the Band in 1974 at Maple Leaf Gardens in Toronto. I was 17 and it was my first major concert. Our music enrichment class at Beacon Christian High School went, with Lambert Zuidevaart, our music teacher. I believe we stayed overnight at his friend’s apartment. We visited Kensington Market, ate at a Chinese restaurant, then walked to Maple Leaf Gardens. That’s what I remember. It was 32 years ago.

I remember vividly the opening chords of the first song: “Most Likely You’ll Go Your Way and I go Mine”. The Band may well have been the greatest back-up ensemble Dylan ever played with. Their performance was incredibly rich, textured, and vibrant. (“Before the Flood”, a double-album of performances from that tour, is worth having.)

Thirty-four years later, my son and I attended a Dylan concert in London, Ontario, at the John Labatt Centre. Like Maple Leaf Gardens, this is a hockey arena, so the acoustics were not great. His backup band was good, but not as good as The Band.

In 1972, Dylan and the Band played the complete concert, with the odd Dylan solo on acoustic guitar, and a few songs performed by The Band without Dylan.

The John Labatt Centre is a newer arena, well-furnished and gleaming. The staff seemed unduly concerned with stopping people from recording the concert with cameras or cell phones. This was a little baffling: who cares if someone creates a 160×80 grainy mpeg of this performance? Are they out of their minds? But the attendants stood guard near our seat, watching intently. When it looked like someone was using the camera on their cell phone or a real camera, they stepped in and asked the person to stop. I had to be clever to snap the few shots I did, and most of them are blurry. 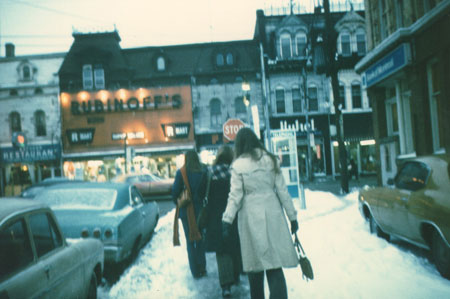 The men sitting in five seats to the right of us seemed to have a dire need to go for beer or to the bathroom about once every song– that is not much of an exaggeration. The seats are so close together, I had to stand up to let them pass each time. It was annoying. Whey they weren’t drinking or peeing, they were yakking away, or making fun of Dylan’s incomprehensible voice.

The voice– unlike old copper or English gardens or Tom Waits– has not taken on an atom of patina or richness. If anything, I think he has become more shrill and spastic, and less coherent, than even in his “Street Legal” or “Saved” days. If I hadn’t already known most of his lyrics by heart I wouldn’t have been able to make them out.

Dylan played a keyboard exclusively – he didn’t touch a guitar– and every song featured the entire band.

Dylan’s encore was generous: four songs, including two of his most revered: “Like a Rolling Stone” and “All Along the Watchtower”. He sounded better singing these two than almost any other song of the night.

Dylan apparently is not content to simply perform the same songs over and over again as originally recorded. Several songs were radically restructured, musically, especially “Desolation Row”, “It’s All right Ma, I’m Only Bleeding”, and “Girl From the North Country”. He performed a generous mix of classics and more recent works. His voice is problematic, but give him credit for investing in his own work, taking risks, and reinventing himself.

I am fascinated by memory issues and this recollection of mine brought up a few.

I was able to determine that the concert was in 1972. Let me see if I can find the exact date: no it wasn’t 1972. It was in 1974, January or February. Surprisingly, I’m having a hard time googling the exact date.

Okay — it was exactly January 10th, 1974. I know because though he played two dates in Toronto (both at Maple Leaf Gardens), I vividly remember the first song I heard: “Most Likely You’ll Go Your Way and I’ll go Mine”, and only the January 10th concert began with that song. (The January 9th set began with “Rainy Day Women”

Where I found the info: www.bobdylan.com

One person who claims to have attended the concert reported that Dylan came out in a Toronto Maple Leaf’s jersey. I think I would have remembered that. I think this person possibly has the wrong night.

Who came with? Janie Lou Kannegieter — I see her in the picture in the beige coat. Pauline Hielema. Our teacher, Lambert Zuidevart. A smart, cultured student from the grade 11 who liked to write — Gertie Witte? I think that was her name. I am not sure about her.

I think the girl with the long brown scarf in the picture is Pauline.

So I was in grade 12. I graduated a few months later and then went to college.

As you can see from the pictures, oddly, I sat in roughly the same location at both concerts: high up on the left side of the arena looking towards the stage. The first is from 1972, the second from 2006. The third picture is Pauline Hielema, and Janie-Lou Kannegieter, and someone else walking ahead of me somewhere near Kensington Market. The picture is blurred, but I am fond of it, because it looks like dusk in winter in Toronto.