Across the street from us, in St. David’s, Ontario, lived an old farmer whose name, if I recall correctly was Ed Pendergast. He lived in a small cabin on the property of his son or son-in-law Fletcher. I don’t know if Fletcher was a first name or last. Mr. Pendergast must have been in his late 60’s or even 70’s when I was a kid, but he continued to farm, year after year, with his horse and wagon, his overalls, his harness for holding baskets, his soiled cap.

It is odd sometimes to think back, as an older adult, upon something you knew only as a child and never really gave much thought to since. This was the 1960’s. Most farmers, of course, had tractors by then, but old Mr. Pendergast continued to use an old white mare named “Nellie” to work his orchard, which was about a mile down the road from his shack. 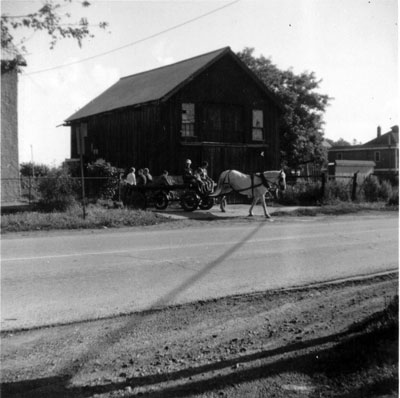 Nellie was an old, sour-looking horse, and she farted constantly as she cantered down the road pulling Pendergast’s old wagon. As kids, if we saw him going by, we’d rush out to hop on for a ride. He would sometimes stop the wagon for us, but as we got older, he didn’t need to– we’d just run along side and then hop up. It was probably a little dangerous, now that I think about it.

He was neither friendly nor mean, that I can remember. He put up with us riding on his wagon for whatever reason. When he came back at the end of the day, he would back the wagon into one barn, and then lead Nellie into her stall in the other barn. We could ride her if we wanted to, and if we arrived at the right time, for this last little leg of the journey. My brother fell off once and broke his shoulder, and Mr. Pendergast was convinced that my parents were going to sue him. My parents would have no more sued him for that than they would have sued a teacher for failing one of us.

The farts were hilarious, of course. Mr. Pendergast would curse at Nellie as if they were her fault. He just generally cursed her all the time. When he picked his fruit, he would move from tree to tree calling Nellie to move along with him. Sometimes she would and sometimes she wouldn’t. But at least once, she decided she’d had enough of standing in the sun waiting and set off for home without Mr. Pendergast. I saw the wagon coming down the road and heard Mr. Pendergast running, trying to catch up to the wagon, yelling and cursing at the top of his voice. When Nellie reached the driveway, she just turned and gallomped right up the incline, which caused baskets of fruit to go careening off the wagon and onto the road. I remember thinking that the horse was smart enough to find her own way home but didn’t understand how you had to take a wide, outside swing so that the wheels would hit the slope of the curb at the same time and keep the wagon level.

I estimate the photo to be from about 1962 or 1963. You can see the way the driveway slopes down to the road. The kids on the wagon are my brothers and sisters except maybe for the kid in the white shirt climbing on from the left. I think that might have been someone named Kasper. I’m at the front beside my sister Coby, I believe. Mr. Pendergast has probably caught sight of my mother with her Brownie camera– he’s looking right at her. It’s a sunny day.