George, I know you strive to be fair and balanced though your basic worldview is conservative.  As a Canadian who “suffers” under our single-payer system, I would ask a very simple, very important question: having lived under a single-payer system for almost fifty years now, could you persuade a majority of Canadians to give it up, and let a “market-based” system prevail?  Do you think most of us believe that will drive down health care costs and give us more “freedom”?

George Will on Health Care

Anybody can find a few Canadians who don’t like our system, and few horror stories of delayed care and inept management.  No reasonable person can deny, however, that the U.S. system costs astronomically more to administer, and that almost all Canadians receive basic health care without the slightest impediment, and that the actual results in Canada are better than in the U.S.

Furthermore, I have no idea of where you would find any proof that Canadians do not have a choice of doctors or hospitals or treatments.

True– we can’t choose to opt out.   But Americans can’t really opt out either.  They can’t!— an American without insurance will still receive treatment at any nearby hospital.  Who pays for it?  Everyone, through taxes and astronomical charges for treatment for the insured.

Isn’t that the basic principle of insurance?  Any of us could suffer a serious illness or injury.  Why not agree to contribute to a plan that covers everyone?  Especially since we all know that those who “opt out” will still receive medical care one way or the other, but certainly less efficiently.

Finally– this is one gripe I do have about conservatives in general:  I think they are far more likely than liberals to persist in believing something long after it has become overwhelmingly clear that the results show they are wrong.  Example:  McCain actually stated at one time that Obama’s idea of talking to Castro was ridiculous because, with his long experience, he knows that it wouldn’t work.  Excuse me!  Exactly how many more years must the embargo continue before it “works”?  That is absurd.  Why not just admit that the embargo has failed and try something new?  Liberals, who have a mind-set that entertains alternative realities, are by nature more inclined to consider other possibilities.  McCain would still be in Viet Nam.  McCain will be in Iraq for 100 years (a joke really– the oil won’t last that long and then we will go back to indifference to human oppression).  And McCain will continue to believe that through some miracle, health care costs can be reduced by letting it “compete in a free market”, as if  dying of cancer is a commodity that could be sold to a hedge fund.

For the record, I’m not sure the Canadian system couldn’t stand a few modifications, and I am very interested in Obama’s hybrid ideas.  Not sure about them– but– as a liberal– I can consider the possibility that different points of view have something to contribute to our ultimate success on any issue.  Hey George, why not be the first reasonable conservative to admit that, as a family values kind of guy, you would like to see all of the nation’s children covered, and it clearly– the results show!– isn’t happening under your free market system.

Ruby, are you contemplating going out somewhere? If you know Kenny Rogers from his pathetic later career as a panderer of faux earnest country cliché– the kind of middling pap that has always given country music a bad name– you might be surprised by a song from his early repertoire, “Ruby, Don’t Take Your Love to Town”. The song was written around 1967 by country singer Mel Tillis who had a serious stutter when he spoke but not when he sang. It was covered by– do you believe this?– Leonard Nimoy, among others, but not successfully until Kenny Rogers and the First Edition took a shot at it in 1969.

I always admire economy in writing– that first line is a marvel. In one stroke, he has set the scene and imputed her motives and honesty– her “tinted” hair. Ruby never speaks in the entire song, never answers the narrator, never even seems to respond to him. Ah the poignant “but it won’t be long, I’ve heard them say, until I’m not around”. Don’t go cheat on me now– wait ’til I’m dead. It will be soon.

But the real marvel of the song is how unselfconscious it is. The narrator is crippled and paralyzed from “that crazy Asian war”. But he is proud to have done his “patriotic” chore. Boy, there is one born every minute, isn’t there? He is no longer “the man I used to be” and acknowledges Ruby’s needs as a woman. Then he says:

And if I could move,
I’d get my gun and put her in the ground

which is about as economical as you can get when describing how you’d like to murder your faithless wife, even if it’s not her fault that you are incapable of giving her love.

In the video I found on Youtube, Kenny Rogers appears to be posturing, making a fetish of restraint there, but the girl with the tambourines is fun to watch. And yes, this is an honest-to-god live performance.

Rogers actually put out a couple of interesting songs late in the 60’s, including the weird “I Just Dropped in to See What Condition my Condition was in”, but he was bit too old for psychedelia, and his instincts were not with rock’n’roll. He shortly split from “The First Edition” and went country. He discovered it was more profitable to produce inane, predictable ballads like “You Picked a Fine Time to Leave me Lucille” and “The Gambler”.

The question about Kenny Rogers moves from, “why did he go bad” to “why was he ever any good?” The answer: he was more influenced by the counter-culture in his early career. And he had a cool chick with tambourines in the band.

What does that last line mean? “For God’s sake, turn around.” A last desperate plea for Ruby to come back. Or does it really mean, “don’t look at me”?

Kenny Rogers is the evil twin of Kris Kristofferson.

Wikipedia on This Song

When Kenny Rogers performed the song in the 1990’s and later, audiences joined in, clapping and laughing, and wailing along-“Rubeeeeeee….. don’t take your love to town!” and you knew that the women in their bulging pastel pant suits were all thinking of waiting for their broken hubbies to go to bed so they see if there was any action in the lounge… Are we all killers? This is a song about a man who was paralyzed in a war wanting to kill his unfaithful wife. A little jarring then, isn’t it, to learn that Tillis was inspired to write this song by a real-life couple known to his family back in the 1950’s, a paralyzed World War II vet, whose wife did indeed take her love to town.

And he did indeed get his gun and “put her in the ground”. Hilarious.

Kenny Rogers can also be glimpsed at the beginning of the Poppy Family’s “Where Evil Grows”, on Youtube. He briefly hosted a syndicated TV variety show in the early 1970’s. It’s a weird video. Watch Susan Jacks’ face– it looks a lot to me like the dancing bit was someone else’s idea. She seems to periodically remember to move her hips. And that is quite an outfit. More on Susan Jacks.

Does this surprise you: his fifth wife gave birth to twins when he was 65.

In 1994, Rogers couldn’t resist the temptation to insult every jazz singer in the country by trying to pass himself off as one with an album of jazz standards called “Timepiece”.  God help us.

It is a little bizarre to see Sarah Palin and John McCain both continue to charge that Obama “pals around with terrorists” long after the slightest shred of credibility has long left that scene. They do the same with the “Joe the Plumber” references, though any rational person can now quickly verify that, in fact, Joe the Plumber keeps more of his money under Obama’s plan than he does under McCain’s.

You would think–I did– that a politician would stop using a certain line of attack once it has been discredited. So it’s somewhat amazing to see McCain and Pail continue to flog those charges at every opportunity.

Did someone advise McCain that the truth here doesn’t matter? It doesn’t matter at all. If you repeat the same charge over and over and over again, no matter how ridiculous, a certain segment of the voting public will begin to believe it. Heck, about 20% of adult Virginians think Obama is a Moslem. How hard can it be to persuade other white Americans that he actually pals around with terrorists.

It occurs to me that each side tends to make the accusations that they would feel were most shocking if levied against their own candidate. McCain lacks empathy for the working man. He is erratic. He is unconcerned about the working class. The Republicans have the most horror for charges that a candidate is not patriotic, doesn’t bowl, doesn’t like guns and shooting furry creatures.

And Obama pals around with terrorists.

And they repeat it and repeat it, and no one wants to be charged with inflammatory rhetoric here, but isn’t that the classic “big lie” strategy? Don’t like that insinuation? How else do you explain the utterly brazen disregard for factual information here? McCain simply doesn’t care whether informed, reasonable people believe it’s untrue– he’s going to repeat it anyway, over and over again, because he believes it will sway voters. He believes in this. He has no hesitation. He has nothing but contempt for the idea of campaigning with honor and respect, as a gentleman, in spite of his increasingly absurd claims to be driven by such sentiment. Driven by it? He pisses on it every time he speaks.

When a committee of legislators in Alaska found the Sarah Palin had, indeed, violated State Ethics rules in the way she tried to force Public Safety Commissioner Walt Monegan to fire her former brother-in-law Mike Wooten, Palin brazenly claimed that the report exonerated her. Palin has been touting her “maverick” credentials as the governor who stopped the notorious “bridge to nowhere” when she did no such thing. McCain was pro-choice only a few years ago. He voted against the Bush tax cut when it was first presented. Forget all that. Don’t even look it up. You are too stupid to look it up. When I tell you I believe something it means exactly what I say it means and nothing more and nothing less. What is a “google”?

Of course, the standard conservative rejoinder is “the Democrats do it too”. Bullshit. Yes, both parties exaggerate and distort each other’s and their own records, but they are not the same. The Republicans, in this election, have built their entire campaign on it. The Democrats might be saying that Northwest is North, but the Republicans are insisting that up is down and black is white.

I’m biased! I’m biased! Yes, indeedy, I prefer Obama. So that qualifies me as biased. If I preferred McCain instead, I suppose I would not be “biased”. I would be “objective”, “fair”, and “reasonable”. Everything I say about McCain is a lie because I am biased because I prefer Obama. So when I say that Sarah Palin doesn’t look like a very strong candidate because she can’t even handle an open-ended interview or press conference, let alone a cabinet meeting— it’s not true. It’s biased. Now you know.

My favorite season.  That’s all. 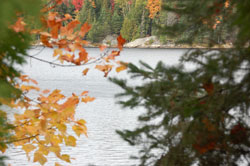 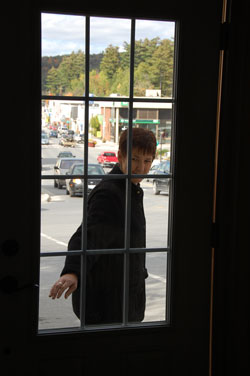 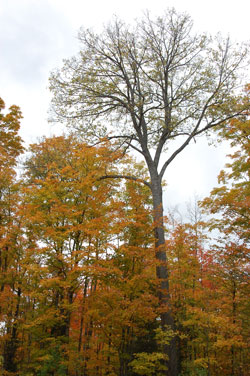