William Wilberforce, the hero of the abolitionist movement, and patron saint of all evangelicals who hate it when liberals paint them as regressive on social issues, did drugs.

Wilberforce was probably not quite as heroic as portrayed in the film “Amazing Grace”, nor, probably, as insufferably pious. (I kept thinking, as I watched the film, that if Wilberforce had been this maudlin and humourless in real life, I might myself have voted against abolition.) The role of Thomas Clarkson seems historically correct– but the heart of the director isn’t in it. We get clear displays of Wilberforce’s physical sufferings (he had some form of digestive ailment) as if he alone paid a personal price for the abolition of slavery. This is the process of conferring sainthood upon someone who, though eminently worthy of honour, had faults we will soon know nothing about. Unless we think in terms of, “that I cared too much”.

In actual fact, many historians feel that Wilberforce was too gullible and respectful of authority to lead the movement, and that slavery would have been abolished earlier (and without quite so many “exceptions”) had a more forceful leader taken up the cause. In fact, at least one historian observed that Wilberforce was finally moved to lead the movement when his friend, William Pitt (the Prime-minister), pointed out that another leader was preparing to take up that role and he– Wilberforce– wouldn’t get credit for it if that happened.

He was also– wait for it– God help him!– a drug addict.

Yes he was. Wilberforce used opium for most of his life, on a very regular basis. The movie “Amazing Grace” honorably makes a point of showing his regular use of laudanum. Dickens also used it. So did Edgar Allen Poe. Lincoln’s wife, Mary Todd, was prescribed laudanum for a sleeping disorder. She became addicted. She was later committed to an asylum.

Interestingly, laudanum is still available by prescription in the U.S. It can be used to treat diarrhea.

Anyway, the support cast of “Amazing Grace” is brilliant, and the sets are wonderful, but Ioan Gruffud is a complete disaster as Wilberforce and drags down the entire film.

His returning health was in a great measure the effect of a proper use of opium, a remedy to which even Dr. Pitcairne’s judgment could scarcely make him have recourse; yet it was to this medicine that he now owed his life, as well as the comparative vigor of his later years. So sparing was he always in its use, that as a stimulant he never knew its power, and as a remedy for his specific weakness he had not to increase its quantity during the last twenty years he lived. ‘If I take,’ he would often say, ‘but a single glass of wine, I can feel its effect, but I never know when I have taken my dose of opium by my feelings.’ Its intermission was too soon perceived by the recurrence of disorder.

All very nice, but unconvincing. Wilberforce’s son is quite careful to assert that his famous dad was “sparing” in the use of a known narcotic, yet he tried and failed several times to stop using it. It’s hard to understand why, if he had no consciousness of it’s effects, he would make the attempt.

What exactly is laudanum?

It is quite amazing how many people who never admitted there was anything wrong with the original plan to invade Iraq now claim that the surge has fixed it. Even better, John McCain insists we are “on the precipice of winning a major victory against radical Islamic extremism.” That’s an absolutely amazing statement since it has always been clear that Saddam Hussein had nothing to do with “Islamic extremism” and everything to do with “I am the king of the world and I’m sitting on scads of oil”. It’s almost as if America is now in the business of creating its own enemies.

It would be more seemly for McCain to declare that America has destroyed Iraq and in so doing, incidentally, removed a really awful dictator from the face of the earth, at the cost of a trillion dollars, while doing virtually nothing to diminish the growth of extremism in other Islamic dictatorships like Egypt and Saudi Arabia and Syria.

“The Media” is an amorphous term that seems to mean, as Alice says, whatever you want it to mean. “The Media”, according to Hillary Clinton, has been soft on Obama. It wasn’t “soft” on her when it nearly led the coronation back in September– that was simple inevitability. Hillary was enchanted. How rude of “The Media” to betray her trust. And she has always put her confidence in strangers.

Gloria Steinem, in an Op-Ed piece in the New York Times, opines that it would be somehow unjust if a woman were not the nominee this year because, after all a woman, has never been the nominee before, and this is the best chance ever of that happening.

Who is this… this interloper!

Clinton has been steadily feeding the perception that Obama is a charismatic pretty boy without substance. That’s kind of odd– I first became aware of Obama when some journalists began writing about his new, broad-minded, non-partisan approach to politics– a rather daring approach given the eight years of Bush’s intensive partisan and vindictive approach to policy. What is more substantive? To challenge political orthodoxy like Obama, or to immerse yourself completely in the “the game” like the Clintons?

I’m liking Hillary Clinton less and less as the campaign wears on. Her attacks on Obama seem petty and mean-spirited. Her determined insistence that she has “experience” is ridiculous and tiresome– it is based on poll results, not on any kind of reality.

If the media themselves swallow the canard about the media being “soft” on Obama, it might also spare some indigestion for the idea that Clinton represents “experience”.

When Clinton’s team showed their “3:00 a.m.” ad to the media, a curious reporter asked when Ms. Clinton had ever experienced a “3:00 a.m. moment” in her career. Apparently, you could hear the crickets chirp in response.

I expect that a Hillary Clinton presidency will get the U.S. into a new shooting war within 18 months of her taking office. She will be out to prove to the generals and the Republicans that she has the toughness to take on America’s enemies, and she doesn’t have the creative independence of an Obama to stand up the maestros of international conflict.

[2022-05: well, Hillary got her chance, and lost the most winnable election in U.S. history.  Would Steinem have you believe it was because she was a woman?  Or was it because she campaigned badly, ignored the advice of her own husband, and used her own private email server — illegally– instead of the official White House server?  Or maybe the most repulsive fact of all: she was the wife of a former president.  The whole idea of a former President’s wife running for President is really, really appalling.]

America is in Iraq to bring freedom and democracy.
Why, when I see our boys raise the flag and salute— my heart just cramps all over.

There is only one example, in the Arab world, of a relatively free and fair election in which an autocratic government party was overthrown and replaced with another government that more accurately reflected the will of the electorate. It was Hamas, when, in January 2006, it defeated Yassir Arafat’s old party, Fatah, in elections in Palestine.

The reaction of the United States, which is determined to bring democracy and freedom to the Arab world? It denounced the results of the elections and encouraged Fatah to arm themselves in anticipation of an uprising.

This is not made up. This is not fantasy. This is not some satirical Hollywood movie. This is real U.S. foreign policy in action and if you still like to stand on your podium with your flag and your torch and your patriotic heart and recite all those platitudes about why the West is fighting terrorism, you deserve to be disillusioned.

The truth has always been that America is far more interested in promoting strategic alliances in the middle east than in any kind of democracy or freedom or even capitalism, if that gets in the way of the oil. How else would you explain U.S. policy towards Saudi Arabia, Egypt, Kuwait, the United Arab Emirates, Dubai, and so on and so on and so on?

As if the January 2006 election wasn’t ironic enough, the only other Arab government that is even remotely democratic is Iran. You may not like Ahmadinejad but, so far, he hasn’t tried to appoint his own son as his successor (unlike our so-called friends in Egypt, Libya, and Syria). 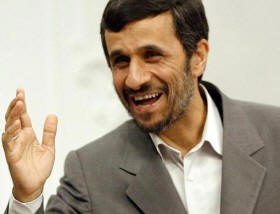 Hello America…. you help me in so many ways that I cannot even begin to express….

What is this shit? And why is it on the CBC?

I mean “The Border”, a CBC drama about the unbelievably exciting lives of Canadian border guards, who we all know risk their lives every day confronting terrorists and drug dealers as they pour over the border into Canada…

I watched an episode by accident. An Islamic terrorist (sigh) had a bottle of anthrax which his wife– wearing a head-covering, of course– obtained from some U.S. lab (sigh) she had worked at earlier, then smuggled into Canada. The terrorist was headed to the Yonge and Bloor subway line to smash the bottle in front of thousands of innocent Canadians. The Minister of Justice and the chief of CSIS were having a set-to about whether or not there was time to water-board the woman. An RCMP agent decided, instead, to take her baby to the subway station so it would be exposed to the anthrax— if she didn’t tell them where her husband was with the anthrax.

But isn’t water-boarding…. torture! Huh! Only to those wimpy liberals with their foolish toleration of diverse cultures that speak different languages and wear head-dressings! Only to those naïve pussies who don’t comprehend the realities of human evil nature! Don’t you know that CANADIAN lives are in the balance? Not cheap Jamaican lives, or worthless Italian lives, or insignificant Indonesian lives, or damned-to-hell Islamic lives, but valuable, important, fabulous CANADIAN lives!

Slight plot flaw there– since they didn’t know where the husband was, and didn’t really know for sure if he had anthrax, it was slightly improbable that the agent would just happen to take the baby to the one subway station the husband happened to select for this grand infection! Shameless contrivance!

Amazingly, the CSIS agents and police entered the subway station and out of all the people of various nationalities and races immediately picked out the one guilty man. The man with the anthrax. Which an agent grabbed before he was able to smash it on the ground, in front of his own baby, which could have been a telly-tubby doll for all he knew because he never really got a look at it. Come to think of it, neither did his wife, who was shown the agent taking the telly-tubby to the subway platform on a closed circuit television and immediately believed that the evil, Satanic westerners would never lie about whether or not it really was her baby in the white bundle if she had no way to actually seeing his face.