Sarah Slean is a terrific singing talent. Maybe a good songwriter too. But.

On the CBC, late at night, May 20th 2011, Sarah was being interviewed as part of a songwriter series on CBC, on Apropos. She told a story about a song she had written. She was living in Paris for whatever reason. Every day, she walked past a little café. And every day she saw a middle aged man sitting there drinking by himself. She said the man looked like he had given up on life. “He pierced me,” she said. She was so moved by his plight that one day she just decided out of the blue to write him a letter. She wrote in the letter that he should “start again”. No matter what you have done in the past, let it go, and start again: the universe loves you.

The next day, when she brought the letter to the café, he was gone. The next day as well. And the next. She gave up on the idea, though she left the letter in her bag. She wondered if he was lying dead in an apartment somewhere, un-noticed and unremembered.

Up until this point, I thought it was a fairly interesting, compelling story. I was all ears, as I drove back from a wedding in St. Catharine’s. I wondered if she would end up buying a beer and sitting down and joining him, to show that there was hope, at least, of friendship in the world. That she would show a little interest in him, ask about his life, his family.

She continued her story. A little later, she walked by again, and there he was! Her heart beating wildly, she walked right up to him and handed him the letter and then walked on. She did not stay to talk.

She was very pleased with herself.

Then I realized that she was less interested in this man who “pierced” her than she was in herself being pierced. And then she wrote a song which she freely admits is really about her. The song is not about him, or whatever interesting thing happened to him, or whatever interesting things he would do in the future, or why he was unable to connect with anyone, or why he had given up. It was all about this courageous young girl who summoned the audaciousness to actually have an amazing insight into her own insight.

And the very definition, to me, of a diva.

The CBC has a soft spot for divas. Many afternoons, on my way home from work, they will play the latest recording by someone who seems endlessly fascinated with her own voice. It’s a kind of showiness that is all about theatricality and ostentation and effects for the sake of calling attention to one’s self, and really quite boring. 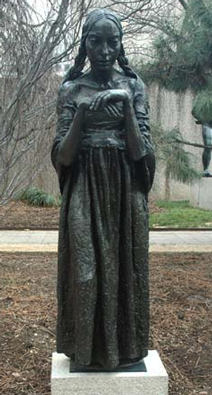 Those who believe that righteous indignation and protest politics were appropriate in the struggle to end Jim Crow, but that something less will do as we seek to dismantle mass incarceration, fail to appreciate the magnitude of the challenge. If our nation were to return to the rates of incarceration we had in the 1970s, we would have to release 4 out of 5 people behind bars. A million people employed by the criminal justice system could lose their jobs. Private prison companies would see their profits vanish. This system is now so deeply rooted in our social, political and economic structures that it is not going to fade away without a major shift in public consciousness. NY Times May 15, 2011

Yeah, not likely anything good is going to happen in that sector of the economy anytime soon.

In 1989, after helping defeat the Soviets in Afghanistan, partly by funding the activities of one Osama Bin Laden, the U.S. walked away.

I have seen references to this fact over and over again in discussions of why Afghanistan– and Pakistan– is still a mess of anti-western agitation. The U.S. helped knock out the Soviets and then walked away and allowed fundamentalist Islamic elements to take over. To this day, apparently, Pakistan does not trust the U.S. to provide stable support in their struggle against radical Islam and that is why they hedge their bets by maintaining links to the the Taliban leadership.

Wow– here it is, in the flesh: you fans paying $100 a pop to watch the Yankees play– you won’t mind if we trot out some washed up old-timer to take a few hacks during a real game do you? Just so Jim Bowden can feel good about himself.

Furthermore, he makes about $15 million this year. Batting .165.

He does have 6 home runs. So let’s be fair– six home runs in 109 at bats is not totally, ridiculously shabby. That would prorate out to about 36 for the year– not shabby. However, the 30 strikeouts don’t look good. And the .165. That means you give up a ridiculous number of outs for those 36 home runs.

No matter– that’s not the point. The point is that Jorge Posada took a careful look in the mirror, and at those shabby stats, and decided, yup, still good enough to play for the Yankees. Those promising young kids in AAA ball? Suck it up. I deserve respect! I am owed respect! Don’t disrespect me. You don’t just play your best player. You owe it to the fans to lose a few games here and there just so you can trot out those old familiar names: Jeter, Rodriguez, Posada….

So when Girardi put Posada 9th in the batting order, in order to minimize the damage he does to the team’s chances of winning every night, Mr. Posada had a royal snit and took himself out of the line up.

If you are not familiar with baseball, especially with Yankee baseball, no one takes himself out of the line up one hour before game time.

As a Blue Jays fan, however, I must respond differently. There is a possibility that the Yankees might actually cast off those venerable veterans like Jeter and Posada, the way they cast poor Johnny Damon aside. I urge the Yankees to keep Posada and Jeter in the line-up every day! They are entitled to months and months and years and years to prove that their current slumps are an aberration! Give them another chance! And another. And another! They’ll show you.

From 1998 to 2003, the Canadian government received proposals from Canadian banks to merge, with each other, and with entities in the insurance industry, in order to compete with the big American financial institutions that were madly rushing into hedge funds and derivatives.

The liberal government of Jean Chretien and Paul Martin thought the idea was unwise and refused the request. They also initiated a review of banking policy that ended up favoring consumer protections over the new profit centers for the bank.

They also looked at the Canada Pension Plan. Like the U.S. Social Security system, economic and social factors had conspired to raise questions about it’s long term viability. What did the Americans do? After bickering and arguing for 20 years: nothing. What did Paul Martin do? Analyzed it, consulted with the provinces, and then fixed it. Done.

Canadian banks did not require a single dollar of government bail-outs during the world-wide financial crisis of 2008-2009. Not one dollar. Canada emerged from the global economic crisis with one of the healthiest economies in the G-8.

In 2002, Stephen Harper criticized the Liberal government for standing in the way of progress by blocking “innovations” in the banking sector. Now he struts around crowing about his management of the financial crisis.

Born on third base; thinks he hit a triple. Mr. Chretien and Mr. Martin left you a surplus, Mr. Harper. Where is it now?

The details of the Liberal approach to bank mergers.

More on the pressure resisted by Martin.

And nice tribute from Newsweek.

In 2002, Stephen Harper lambasted the then-Liberal government for “the failure to adapt bank regulation to the needs and challenges of a financial sector that is less and less national, and more and more global.”

Yes, it’s from a partisan source.

What is truly exceptional is how American politicians like Newt Gingrich have managed to take “I’m better than you are and I can do whatever I want to do because I’m special” and repackaged it as some kind of weird religious-patriotic mishmash expressed in a harmless sounding euphemism: “exceptionalism”.

It’s code. “Manifest Destiny” is back. Look out, boys. This time, they’re after your oil, your fish, and your water. And they’ve invented a new kind of morality to make it right. And they’ll kill you if you stand in their way.

Newt Gingrich has written an entire book which essentially argues that America, the exceptional, is like some titled noble to whom the rest of the world, a collection of lesser nobles, peasants, and slaves, must kowtow.

No, of course he doesn’t put it that way. They never do, do they? But no one should mistake the meaning of “exceptional” for anything else: we get to make our own rules and we have special access to the world’s wealth and resources because God said so.

Eyewitness identification is the most common cause of wrongful convictions. Of the first 200 DNA exonerations, for example, 158 involved convictions based on eyewitness testimony, according to a 2008 study by Brandon L. Garrett, a law professor at the University of Virginia.  NY Times, 2011-05-02

From a story about a man who was convicted of murder based solely on the testimony of two witnesses who picked out his picture from a police book.

That’s it. Two witnesses, from a photo. The suspect, Richard Rosario, did not have a very good lawyer, because there were at least seven people in Florida willing to testify that he was somewhere else at the time the murder took place.

But this is America where justice is a joke. That image on the left — that’s America’s Lady Justice. Look at that face: expectant, suspicious, arrogant, rubbing her hands in anticipation of another long sentence.

Sanchez and Davis identified Rosario as the shooter. The prosecution also called Diaz, the hotdog vender who had witnessed the argument leading up to the shooting, expecting him to make an in-court identification. However, Diaz refused to identify Rosario as the shooter. The prosecution presented no other evidence linking Rosario to the shooting. Although many people in the Bronx knew Rosario and his fiancée lived there, the prosecution presented no witnesses who said they saw him in New York during the month of June — except the two strangers who briefly glimpsed Collazo’s murderer

Rosario’s mistake was the completely ridiculous assumption that he would be treated fairly by the criminal justice system when he voluntarily returned to New York to respond to the police investigation. He should have fled the country. But then, a lot of people–far fewer, I hope, than twenty or thirty years ago– would have insisted that only a guilty man would flee the country.